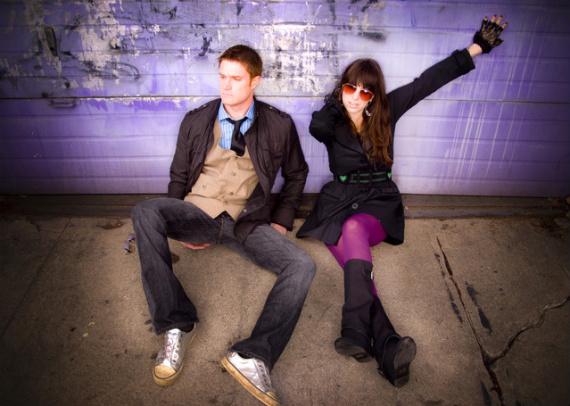 Van Go Lion are a new electro pop duo from Portland, who have released their first EP, Body Moves in the US, and their second EP We Don’t Miss A Beat in the UK only a couple of weeks ago. The title track is a slick and shimmering piece of pop with a catchy chorus and a brilliant bridge.

Their music has a certain air of melancholy in the style of Kylie or Sophie but is also clearly 80’s influenced. Perhaps it is The Ache, with its reminiscing lyrics and strong beat and synth the song that reflects these qualities the best.

Another track to highlight is definitely Body Moves. It has the strongest beat that instantly invites us to dance.

Last, but not least, their cover of Shattered Dreams is very good indeed.

I had a little chat with them, which you can read below:

First things first, tell us a little about yourselves, how did you meet, how did Van Go Lion happen…

Josh and I met a couple years back in Portland when I auditioned to be in his band. Through Craigslist! We started out as a alternative pop band but transitioned to an electropop two piece in 2010. And we’ve been writing together ever since!

Who are your main musical influences? Not just on your current music sound, it can be those artists who have influenced you somehow towards your music career when you were younger.

Madonna, Michael Jackson, Queen, Bowie, The Eurythmics… and on and on and on. I grew up idolizing Mariah Carey, Whitney, Gloria Estefan, Amy Grant… All the pop ladies!

I assume you write your own material, how does that creative process usually work?

Yep, we write and produce everything. Usually, Josh will create a piece of music, a rough idea, and I’ll take that home and set lyrics and vocal melody simultaneously, then we’ll come back together and form the song, then record vocals, then go back and polish the instruments and get into the real production.

Is there any artist or DJ you’d like to collaborate with?

Calvin Harris! He is always on the top of my list these days. We’re also way into Empire of the Sun right now… so goooood!

You’ve got an EP out in the US and another one in the UK, are you focusing in just one of the areas, are you looking forward worldwide availability, is there a place you’re more interested on trying on first than the other…

Worldwide, baby! Of course we want to tap into the US market, but with electronic pop, the market is just everywhere. Especially in the UK. Such a great music scene, and we can’t believe this early on we’ve already put out a release with a London label (Aztec).

What have you got lined up for a near future in terms of releases, gigs, etc?

We’re working on our first full-length release right now. It’s awesome. The songs just keep getting better, so it’s hard to come to a stopping point and just say, “OK we’re ready!” It’s like an addiction.

Describe your band, your sound, in a sentence.

There’s a writer in New York (Kari Elam) who is a lot better at this than I am, so I’m going to steal hers:Disco Disney fairy tales meet Donna Summer on planet Eurythmic in a 21st Century new wave Pop wonderland… smart synth-pop like when four-on-the-floor met 4.0.

Final one: Who is your favourite Spice Girl?

It’s a toss-up between Scary and Ginger. Josh would probably say Old Spice.